Alternative Credit Score For Your Clients

There is a company that can help your client get loans with the affordable interest rates they have been missing out on. If your clients become a member which is FREE,  they will be recognized and respected by lenders for the financially responsible person they are. This company is call PRBC shore for Payment Reporting Builds Credit

Unlike traditional credit scores that are based solely on how well clients have managed certain kinds of loans and credit cards, the PRBC Alternative Credit Score proves your financial responsibility through other means, such as paying your rent, utility, phone/cable, insurance and other bills every month. The payment histories for these are utilized to create a PRBC Score which reflects the life your clients lived, rather than a mold the will never fit into.

More than 100 million Americans (a third of the country) are underserved by a credit reporting system that doesn’t record their good habits. PRBC is changing that, and making sure you get the credit you deserve. Avoid rejections and painfully high interest rates. As a PRBC member, your client will have a credit score, as well as tools to find lenders and merchants who offer credit at reasonable rates.

Now all credit solutions are coming up with their own model for nontraditional credit data. As The FICO® Expansion® Score is a new Fair Isaac credit score designed specifically to help lenders extend credit to consumers in new markets

Remember the $3.6 billion settlement the government made with huge lenders accused of wrongful evictions and other abuses? Wronged homeowners are beginning to get their settlement checks in the mail, only to find that some of them bounce. That’s right. After more than two years of waiting for the checks, the first round of checks arrived last week, but the company chosen to distribute the checks, Rust Consulting, failed to fortify the account upon which the checks were written, Huntington National Bank in Ohio.

Negative Information Is NOT Always Permanently Removed after 7-10 Years.

There is language in the Fair Credit Reporting Act that allows the credit reporting agencies an exclusion to the requirement to not maintain negative information on credit reports after 7 to 10 years. Here is it:

“a credit transaction involving, or which may reasonably be expected to involve, a principal amount of $150,000 or more;

the underwriting of life insurance involving, or which may reasonable be expected to involve, a face amount of $150,000 or more;

the employment of any individual at an annual salary which equals, or which may reasonable be expected to equal $75,000 or more.”

When you think about these exclusions the one that’s most concerning is clearly the $150K loan.  How many mortgage loans are for greater than $150,000? I don’t know for certain but I’d have to assume a very large percentage are for more than that amount.

Now, just because the credit reporting agencies are allowed to do something it doesn’t mean that they’re going to choose to do something. In all of our years we’ve never, ever seen a credit report that included what was previously believed to have been outdated information simply because of one of those three exceptions to the 7-10 year rule.

In addition to that exemption, there’s also the issue of unpaid tax liens and unpaid government backed student loans. There is nothing in the FCRA requiring the credit bureaus to remove unpaid tax liens, ever. And, there is no language at all in the FCRA addressing the amount of time defaulted student loans can be reported. That language is actually part of the Higher Education Act of 1965 (no, I’m not kidding). The Higher Ed Act says that the credit bureaus can maintain student loans until they’ve been paid off.

Given the number of student loans in default and the fact that there is well in excess of $1 trillion in outstanding student loans currently, we foresee a grim credit future for people who are obligated to pay them back but have defaulted.

Lenders in the auto industry, which include banks, dealers, and auto finance companies, usually use the auto industry version of the FICO score. This version is built specifically for the auto lending industry to predict that an auto loan will become 90 days or more past due within the next 24 months.  As with the classic FICO score, the auto version differs at each bureau. There are at least two versions of the auto score at each bureau, because there is a transition period getting lenders to switch to a newer version.

None of the industry specific versions not available for consumers to purchase. Therefore you can make the assumption that your client’s auto version is good if their classic FICO is good.

Automated vs. Manual Underwriting For A Mortgage

There are some gurus that believe that one should have a zero credit score and get a manual underwriting for obtaining a mortgage instead of going through an automated one.

Here is why:  if you get an automated response, you will get just that. Someone plugged in your information into a software application and you are conditionally approved. That usually leads to the likelihood of obtaining a final approval. After this process a human being/underwriter only has to make sure that the software approval wasn’t the result of a glitch (basically, just double-checking).

However, if you can’t pass an automated one, you have to go through a manual process where a human being/underwriter will manually look over every inch of your information and MUST find a reason to approve you. This process usually never leads to a final approval, so don’t believe those gurus.

Based on a fresh look at the national distribution of FICO® 8 Scores, it appears that the profile of credit risk for U.S. consumers, while still mixed, may be slowly returning to a prerecession pattern.

People with higher FICO® Scores have generally increased their revolving credit usage since 2010. This trend is echoed in score distributions nationally during 2012 as the number of people with scores between 750 and 850 dropped slightly—from 37.4% in 2010 to 37.2% in 2012. Higher balances and higher credit utilization could help explain this modest downward shift in scores. 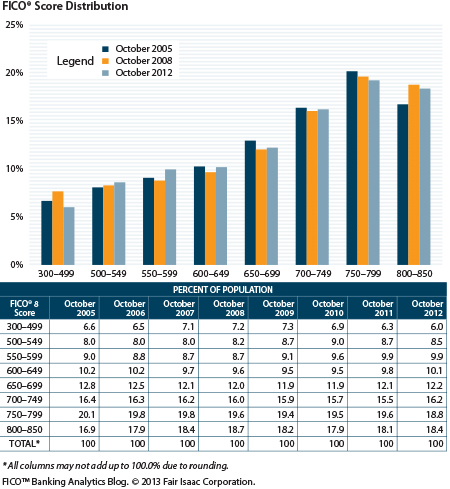 At the lowest end of the score range, the number of people with FICO® Scores below 500 remained very low in 2012 by historical standards. During 2012, there was a modest increase of roughly 600,000 people at that score range between April (the data sample used in our last score distribution post) and the October data shown above. This may be partly explained by an increase last year in mortgage foreclosure rates.

Another useful way to understand score dynamics is by looking at score movement over time. The table below shows how the scores of different pockets of consumers migrated between October 2011 and October 2012. Take, for example, consumers with FICO® Scores of 750-799 in October 2011. By 2012, 21.0% of them had moved into the 800-850 score range, 58.3% stayed in the same range, and 20.7% moved to lower score ranges. 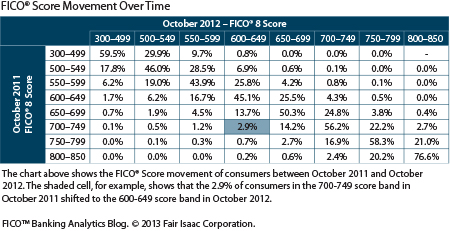 This table demonstrates that although the score distribution shifts are not dramatic, there will invariably be pockets of the population that shift to higher and lower score ranges.  Even over a short 12-month window, consumers with lower FICO® Scores can move to higher score ranges. For instance, 30.9% of consumers who fell into the 550-599 score range in October 2011 scored 600 or above one year later, and only 25.2% of this group scored lower in 2012. This demonstrates that consumers can improve their credit scores over time, which is why we encourage lenders to engage in consumer credit education.

The CARD Act does not change the FCRA!

Credit cards sent out letters to customers explaining what changes they should expect due to the CARD Act going into effect.   The letter will explain how the credit card company won’t be putting clients into a default rate for being a few days late with a minimum payment.  The letter will also state that they will only raise rates if the account goes 60 days or more past due.  After reading the letter, he asked me a disturbing question.

But many client are confused thinking that their credit scores will improve since banks can now only report accounts that are more than 60 days past due but this is NOT true.

The CARD Act DOES NOT replace or modify the FCRA.  The CARD Act, in part is intended to make it easier for clients to manage their credit card accounts.  They need to understand that if they fail to make minimum payments by the scheduled due date that their credit score will be damaged.  Under the FCRA, if a creditors report accounts to the credit reporting agencies, it must be accurate.   Any past due amount (even if you are not 30 days late) will hurt your score.

Short Sale or Foreclosure: Which is Better for Credit Scores?

The worst of the housing crisis seems to be behind us. (After all, the number of foreclosures continues to fall.) But it isn’t all good news just yet.

The most recent data from CoreLogic, a real-estate research firm, found that short sales (where a home is sold for less than the mortgage and the bank accepts the loss) have increased from 8.1% of total home sales to 10.4% year over year.

Most consumers probably assume that opting for a short sale limits the damage to their credit. (After all, if you have a foreclosure on your credit history, you could remain in lenders’ penalty boxes for up to seven years.But surprisingly, a short sale can drastically impact your credit score, too. “Both events [a short sale and a foreclosure] can have substantial repercussions to one’s credit score and are treated as derogatory items by the FICO score.

For example, if your client with a high credit score (720 to 780) short sells their house, their score could nosedive 125 to 160 points. If their score is only around 680, they could lose 70 to 105 points. In both situations, the deductions are basically the same as when a client goes through foreclosure.

Furthermore, it takes approximately the same amount of time after a short sale and after a foreclosure—seven years—for the person with a high score to restore their credit; if their score is lower to start with, it will rebound in about three years.

Research has shown that consumers with a short sale are credit risks, and they are less likely to pay off their credit obligations and this is corroborated by a recent FICO study that found that “one out of every two borrowers who experienced a short sale went on to default on another account within two years.”

So if your client must have a short sale, is there anything you can advice for them to limit its impact?

The bad news: There’s no way to make your client credit score immune to a short sale.

The good news: You might be able lessen the blow.

If the lender reports the transaction to the credit bureaus as a short sale with a deficiency balance (usually difference between the sale price and what your client owe), then the effect on their credit score is the same as if they had gone through foreclosure.

In short, simply asking a favor of your client’s lender could be the difference between their credit score dropping—or plunging.

The Seal That Stands For:
Excellence, Ethical and Expert